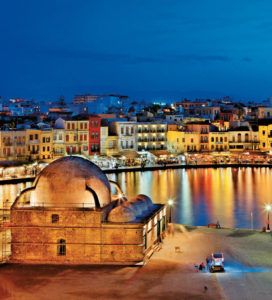 Let’s say a few words about the city of Chania, this beautiful city with a history of thousands of years it carries over it.

The present city of Chania is built on the site of the ancient and powerful Minoan Kydonia (1071 BC – 69 BC). From the Minoan empire, the city first passed into the hands of the Romans (69 BC – 330 AD) and then to the Byzantines. Only a few things remain to us from the feats of those empires, but the Venetian legacy that followed have survived to this day.

During the Venetian occupation(1204 – 1645) the city, as well as the rest of Crete, flourished in the commercial and agricultural sector. At the same time, it took the form we see nowadays. The outer walls were built, the Kastelli hill’s wall becomes stronger, the trenches and the bastions were built, the imposing courtyards, many temples and emblematic buildings and, of course, the famous lighthouse at the old harbor.

The Venetians followed by the Ottoman Empire (1645-1878), during which changes were made in the city, both in its structure (conversion of churches into mosques) and in its demographic characteristics.

As the years are passing by Crete becomes independent of the Ottomans (the first step is with the Treaty of Halepa (1878)) and in 1898 the Cretan State is created and thanks to the actions of Eleftherios Venizelos it will be incorporated into the Greek state in 1913.

If someone makes a survey for Chania he will understand that his choices are more than many. The places you can visit are difficult to fit into an article so we will show you selectively some of them.

Let’s start from the very city of Chania and then go to the surrounding areas.

We could not begin without mention the old port and the Egyptian lighthouse built by the Venetians. The lighthouse for centuries has been an important building in the city and the jewel of it in the last decade since it attracts thousands of tourists every year to walk along the arm to see it and photograph with it.

The lighthouse is surrounded by the old harbor where you will find all the possible choices in the entertainment sector, traditional taverns, and fusion restaurants as well as all kinds of accommodation options. Opposite of the lighthouse you can see the Giali Mosque (Mosque of Kuchuk Hassan) and, a little further easter, the Venetian shipyards.

The atmosphere in the streets of the old town is enchanting and a tour in them will take you to a different era, away from the rhythms of modern big cities. The same and the places you can visit in it. We recommend you to visit the Etz Hagim Synagogue in Topana, the Metropolitan Church of the Presentation of the Virgin Mary, as well as the sunlit square that surrounds it, the house of Eleftherios Venizelos in Halepa, the Koum Kapi Coast, Splantzia Square and the hill of Kastelli. At the last one, we promise you that you will face one of the most enchanting sights in your life, especially if you stay up to the sunset.

In the wider area of ​​Chania, for which car hire is deemed necessary, a visit certainly deserves the eastern side of the prefecture (the area around the airport) where you can visit the Seitan Port(devils port), the bay of Stavros and the monasteries of Agia Triada and Gouvernetou(do not forget to visit the gorge that follows the monastery) which stand between these two separate beaches.

On the west side of Chania you will find the famous tourist destinations Agia Marina – Platanias – Stalos – Maleme that will fascinate you with the abundance of choices they offer to the visitors as well as with the cosmopolitan vibe of these places. Also at the west, you will find other, less popular destinations, which, unlike the former, offering you tranquility, a relaxing environment and the experience of living in a village in Crete.

The experience of being a part of the Cretan world can, of course, be to the south of Chania, in the areas around the White Mountains. At both the foothills of the mountains and near the peaks, you will find small picturesque hamlets full of warm people that will fascinate you with their unchangeable, natural beauty. In these places, you will experience better than anywhere else the notorious hospitality of Crete.

A tip from us, anywhere in Crete, from big cities to small villages, do not forget to try as much local food and as many local products as possible. In this way, you will find yourself why Cretan cuisine has its own place in the large Mediterranean cuisines.

Somehow, uDrive Chania Car Rental emerged from the need for private tours, explorations, and acquaintance of every corner of Crete. A local business with both young and experienced staff, ready to respond to any of your needs. Browse our website and discover all the possibilities that we offer you both in car and motorcycle rentals as well as in excursions and private transfers within the island.